H.P. Lovecraft and the Personal Apocalypse of "Young Goodman Brown" 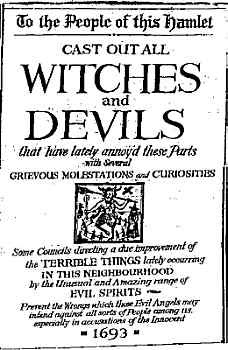 But at deeper psychological levels, the tale is a frightening meditation. While utterly reflective of the post-Puritan period in which it was written, if subjected to further examination "Young Goodman Brown" is shockingly modern -- and even hauntingly forward-thinking.

"Goodman Brown" is groundbreaking in terms of both its place in the history of the American short story and for its still-powerful vision of a personal apocalypse, the tale of a man who finds all that he once took for granted to be false, a fore-tremor of the cosmic-level terrors of Poe, Lovecraft and those who come after.

The story concerns Brown's encounter with supernatural forces in the woodlands near witch-haunted Salem. Whether the spectral sabbat Brown attends is a phantasmagorical dream or stark, hideous reality is never firmly established. In the latter part of the tale, Brown admits the ambiguity of the event, as does Hawthorne himself as the voice of the narrator.

But the effect of the daemonic visions upon Brown and his psyche is permanent and deleterious:
"And when he had lived long, and was borne to his grave...they carved no hopeful verse upon his tombstone, for his dying hour was gloom."

With a wife named "Faith," Hawthorne's tale of Brown's meeting with the devil contains some fairly obvious allegory and deliberate moralizing:

"Faith kept me back a while," Brown says to the mysterious, demonic figure that resembles both his own father and certain traditional depictions of the devil. He is late. Perhaps too late because he has chosen to meet his midnight guide at all.

Later, he sees an old woman who taught him his catechism (1), heading off to the sabbat. He thrills with horror to hear this once-venerated mentor and the devil discussing things almost insensibly horrific, including the blasphemous ingredients of the witches' flying ointment.

"What if a wretched old woman do choose to go to the devil when I thought she was going to heaven: is that any reason why I should quit my dear Faith and go after her?" he asks.

The story is full of such asides, with Brown's wife eventually swept up by the Satanic throng in perhaps his ultimate moment of terror and pain. It is never actually revealed whether Faith accepts her seeming dark destiny, but to Brown, she, and what she represents, is already lost:

"My Faith is gone!" cried he, after one stupefied moment. "There is no good on earth; and sin is but a name. Come, devil; for to thee is this world given."

As the story progresses, Brown comes to understand that all of the "good" people he has admired, and all of the bad ones he has attempted to not be like, are all given over to the devil, from simple townsfolk to clergymen to the land's highest authorities:

"Wickedness or not," the devil says, "I have a very general acquaintance here in New England. The deacons of many a church have drunk the communion wine with me; the selectmen of divers towns make me their chairman; and a majority of the Great and General Court are firm supporters of my interest. The governor and I, too--But these are state secrets."

Whether the visit to the sabbat is real or illusory, Satan triumphs. His world utterly shattered, his hope gone, Goodman Brown descends into a life of quiet agony, becoming "stern, a sad, a darkly meditative, a distrustful, if not a desperate man:"

"On the Sabbath day, when the congregation were singing a holy psalm, he could not listen because an anthem of sin rushed loudly upon his ear and drowned all the blessed strain. When the minister spoke from the pulpit with power and fervid eloquence, and, with his hand on the open Bible, of the sacred truths of our religion, and of saint-like lives and triumphant deaths, and of future bliss or misery unutterable, then did Goodman Brown turn pale, dreading lest the roof should thunder down upon the gray blasphemer and his hearers. Often, awaking suddenly at midnight, he shrank from the bosom of Faith; and at morning or eventide, when the family knelt down at prayer, he scowled and muttered to himself, and gazed sternly at his wife, and turned away. And when he had lived long, and was borne to his grave a hoary corpse, followed by Faith, an aged woman, and children and grandchildren, a goodly procession, besides neighbors not a few, they carved no hopeful verse upon his tombstone, for his dying hour was gloom."

Lovecraft, in his still well-read essay "Supernatural Horror in Literature," has this to say about Hawthorne's own Saturnine nature:

"Evil, a very real force to Hawthorne, appears on every hand as a lurking and conquering adversary; and the visible world becomes in his fancy a theatre of infinite tragedy and woe, with unseen half-existent influences hovering over it and through it, battling for supremacy and moulding the destinies of the hapless mortals who form its vain and self-deluded population."

There is more than a passing debt to the tone and character of Hawthorne in some of Lovecraft's own tales, such as "Dreams in the Witch-House," and a definite nod to the author's family in the following section:

He knew his room was in the old Witch-House - that, indeed, was why he had taken it. There was much in the Essex County records about Keziah Mason's trial, and what she had admitted under pressure to the Court of Oyer and Terminer had fascinated Gilman beyond all reason. She had told Judge Hathorne of lines and curves that could be made to point out directions leading through the walls of space to other spaces beyond, and had implied that such lines and curves were frequently used at certain midnight meetings in the dark valley of the white stone beyond Meadow Hill and on the unpeopled island in the river. She had spoken also of the Black Man, of her oath, and of her new secret name of Nahab. Then she had drawn those devices on the walls of her cell and vanished.

According to the Web site http://www.hawthorneinsalem.org/, Justice John Hathorne, Hawthorne's paternal great-great-grandfather, is "best known ... as the 'witch judge' as he was a magistrate of the Court of Oyer and Terminer and the chief interrogator of the accused witches in the Salem witchcraft hysteria of 1692."

What is interesting to the readers of both men is how much "Young Goodman Brown" presages much of Lovecraftian fiction. Of particular interest is Brown's encounter with reality-shattering truth.

One can argue that his madness stems from the general hysteria against witchery that gripped Salem, and that would be a perfectly modern, psychological evaluation of the story(2). A true visitation from evil is an equally valid possibility, and Hawthorne wisely leaves the reader to decide.

As Lovecraft himself writes in "The Tomb:"

"Men of broader intellect know that there is no sharp distinction betwixt the real and the unreal."

Whether the events are empirically true or merely a dream, Hawthorne's tale is one of a genuine personal apocalypse, an utter unhinging of Brown's personal perceptions of himself, his neighbors and his wife, much akin to the terrible price of knowledge that later becomes de rigeur in Lovecraft's own fiction and the popularized "Cthulhu Mythos"-tinged stories that follow. Goodman Brown's world is forever changed, the once-simple joy of his young life and the purity of his love for Faith -- what she symbolizes and her physical embodiment -- forever turned toward darkness and quiet misery.

(1) An interesting aside: According to http://www.newadvent.com/, "catechumen," in the early church, "was the name applied to one who had not yet been initiated into the sacred mysteries, but was undergoing a course of preparation for that purpose."

(2) For one such example, see http://bcs.bedfordstmartins.com/Virtualit/fiction/criticaldefine/psychessay.pdf

In searching for sites related to web hosting and specifically comparison hosting linux plan web, your site came up.

good afternoon people. I'm actually into shoes and I have been searching for that meticulous model. The prices for the shoes are about 300 pounds on every page. But definitively I base this location selling them for the benefit of half price. I absolutely want those [url=http://www.shoesempire.com]prada sneakers[/url]. I will probably purchase them. what can you tell me about these?

good morning bros. I'm actually into shoes and I had been digging as far as something that singular make. The prices seeking the velcros are around 340 dollars on every site. But finally I set this location selling them for half price. I absolutely love those [url=http://www.shoesempire.com]gucci sneakers[/url]. I will probably order those. what is your opinion?

good afternoon fellas. I'm really into shoes and I have been searching for that particular model. The prices as regards the shoes were approximately 340 pounds on every page. But for all I bring about this location selling them someone is concerned half price. I in reality love those [url=http://www.shoesempire.com]gucci sneakers[/url]. I will absolutely purchase those. what can you say about it?

Hey, I can't view your site properly within Opera, I actually hope you look into fixing this.