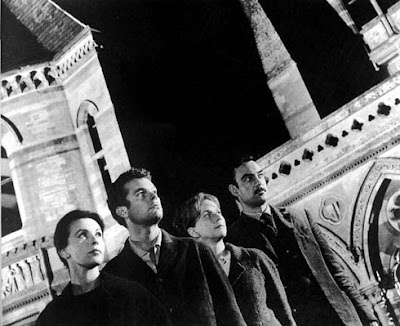 I have started working out, and to pass the the time I listen to audiobooks. One I have recently chosen is an unabridged audio performance of Shirley Jackson's "The Haunting of Hill House."

Shirley Jackson was a wonderful narrativist. You probably encountered her somewhere along the way for her short story, "The Lottery," in which a seemingly idyllic town harbors a dark secret.

But "Hill House" is a bonafide masterpiece, a tense, deeply psychological, visceral read that gets its hooks into you and refuses to let go. Some of it is dated. Doesn't matter. It is the music of Jackson's language that draws you in, lets you hear, see, touch, feel, and even taste the dark essence of Hill House, a house "born bad," a brooding pile that some think should be burned to the ground -- and the earth sown with salt.

There is great ambiguity in the story. Is Eleanor, the primary protagonist, crazy? Or is the spiral into madness and despair she experiences the plan of something hidden and sinister? What, exactly, haunts Hill House? Is the house itself in some manner alive?

We never truly know, and that makes the tale all the more frightening.

The richness of Jackson's language is extreme. Here is the famous opening from the book:

"No live organism can continue for long to exist sanely under conditions of absolute reality; even larks and katydids are supposed, by some, to dream. Hill House, not sane, stood by itself against its hills, holding darkness within; it had stood so for eighty years and might stand for eighty more. Within, walls continued upright, bricks met neatly, floors were firm, and doors were sensibly shut; silence lay steadily against the wood and stone of Hill House, and whatever walked there, walked alone."

The inexorable feeling of dread persists throughout the work, building to an in some ways inevitable conclusion. It is, in a word, wondrous. The story also makes use of several of the conventions of fairy tales, and there is a dreamlike quality to the writing style throughout.

Tonight, I listened to a famous scene in which the supernatural seems to manifest in the house in such a manner that the house -- or whatever lies within -- separates the party of four paranormal investigators within. It is a breathtaking sequence, made somehow all the more real and potent by the fact that it is being spoken, the words echoing through the cathedral chambers of my skull and reverberating up and down my spine.

The scene started as I was winding down, and so I took the moment to sit and listen intently as it unfolded.

In our workout room, the windows are tinted. But for some reason, the tint was applied backward, which means that you can see in perfectly from the outside but that you can't really see out as well while you are in. It is in some ways an unnerving arrangement on a good night, and a night in Hill House ... well, let's just say I was rather careful leaving.

Still listening to the recording, I walked outside. A chill night wind blew up, rattling the springtime leaves, and a setting moon, a ruddy orange hanging among the post-midnight blue, dominated my gaze. The wind followed me home, and the dew that formed on the grass glittered like curious, cast-off jewels, a road to fairyland of much the sort Eleanor often fancies finding in her journey to Hill House.

I made it home. My cat emerged from the bedroom, intent on going outside. But he hesitated at the open door and then eventually turned away. In time, he ventured out, but even then his footsteps were measured and light.

"Hill House" is a work of unusual and affecting power. If nothing else, treat yourself to the 1963 film adaptation. But if you want a real treat, read -- or listen to -- the novel. It is well worth reading, and well worth revisiting.

If you love on|you like} lottery tickets, cellular real cash scratch cards are great. Do not consider playing as a way of earning cash and only play with cash that you could afford to lose. Remain management of|in charge of|in command of} your gameplay through the use of Mr Green’s bet365 Predictive Tool, set your self gaming limits, take a break or self-exclude your self. For more information on our Green Gaming instruments please click on here. If you are be} worried about your playing or affected by another person's playing, please contact GamblingTherapy or GamblersAnonymous for assist. The ultimate sum received by the player is dependent on the variety of Keno numbers drawn and how many of} are a match to the player’s numbers, as well as|in addition to} the entire of numbers the player selected, and the amount the player wagered.